Oporornis tolmiei
Passeriformes
Members of this diverse group make up more than half of the bird species worldwide. Most are small. However their brains are relatively large and their learning abilities are greater than those of most other birds. Passerine birds are divided into two suborders, the suboscines and the oscines. Oscines are capable of more complex song, and are considered the true songbirds. In Washington, the tyrant flycatchers are the only suboscines; the remaining 27 families are oscines.
Parulidae
This large group of small, brightly colored songbirds is a favorite of many birdwatchers. Wood-warblers, usually called “warblers” for short by Americans, are strictly a New World family. Most of the North American members of this group are migratory, returning in the winter to the tropics where the family originated. Warblers that nest in the understory tend to have pink legs and feet, while those that inhabit the treetops usually have black legs and feet. North American males are typically brightly colored, many with patches of yellow. Most North American warblers do not molt into a drab fall/winter plumage; the challenge posed to those trying to identify warblers in the fall results from looking at mostly juvenile birds. Their songs are generally dry, unmusical, often complex whistles (“warbles”). Warblers that live high in the treetops generally have higher-pitched songs than those that live in the understory. Warblers eat insects gleaned from foliage or captured in the air. Many supplement their insect diet with some seeds and fruit, primarily in fall and winter, and some also eat nectar. Most are monogamous. The female usually builds the nest and incubates four to five eggs for up to two weeks. Both members of the pair feed the young.
Fairly common summer resident.
Source of Bird Audio

MacGillivray's Warblers are olive above and bright yellow below, with distinctive gray hoods extending to their breasts. Males' hoods are dark charcoal gray, and females' hoods are lighter gray. Both sexes have white crescents above and below their eyes. Males have dark areas in front of their eyes. Immature birds have less distinct hoods and resemble females.

MacGillivray's Warblers are found in dense thickets and are a characteristic species of the low, dense undergrowth found in riparian areas and clear-cuts within northern coniferous forests. In western Washington, they are usually in areas that have been clear-cut, burned, or otherwise disturbed. As succession proceeds to the point that trees start to take over from shrubs, MacGillivray's Warblers leave the area. In eastern Washington, they are usually in dense, low vegetation found along streams, especially willow and alder thickets. During winter, they inhabit similar areas in the foothills and mountains of the Neotropics.

MacGillivray's Warblers generally stay in the understory or on the ground, although males sometimes sing from higher perches. They flick their tails from side to side while they forage in the foliage, up the trunk of trees, or on the ground. These shy, secretive birds are often hard to see, but are easily located by their loud vocalizations.

Both members of the pair help build a well-concealed nest in dense shrubs, often in an upright fork. The nest is a loose, open cup made of weeds, bark strips, and grass, and lined with rootlets, hair, and other soft material. The female incubates 3 to 5 eggs for 11 to 13 days and broods the young for the first few days after they hatch. Both parents feed the young, which leave the nest 8 to 9 days after hatching. The parents continue to feed the young after they fledge, and it is not known how soon the young are fully independent.

MacGillivray's Warbler migration is spread out over an extended period in both the spring and fall, although most leave before fall actually begins (September 21). They are not seen in October at all. They are highly migratory and winter in Central and South America. Much of the population is concentrated in the Rocky Mountains, and their primary route is along those ridgelines, although vagrants are seen throughout North America during migration. They generally migrate at night.

MacGillivray's Warblers are found in appropriate habitats on both sides of the Cascades and up into the mountains from late April to mid-August, and to a lesser extent through mid-September. They are found breeding at fairly high elevations, especially in willow or alder thickets. They are rare along the outer coast and avoid developed areas. 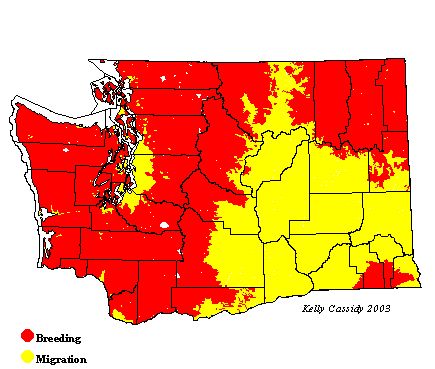